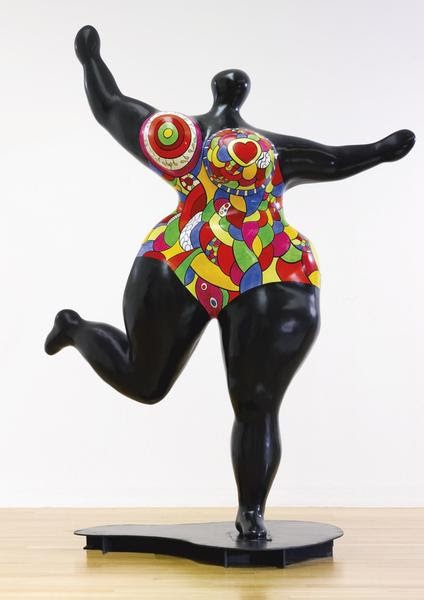 Born beautiful and wealthy to an aristocratic French family, Niki de Saint Phalle was part of the Nouveau Realisme (‘New Realism’) movement originally founded by Yves Klein and Pierre Restany. She moved to New York City at an early age and grew up there. While living in NYC, Niki capitalized on her good looks by doing some modeling during her teenage years. She married early and had children but left her family for artist Jean Tinguely. During her first marriage, Niki was committed to an asylum at 22, but managed to leave after six weeks, but not before learning how to paint and resolving to become an artist. Her work is characterized by bright colours, bold patterns, and an overall sense of whimsy. While her work is often playful, there is also a serious message in each of them. Niki was known for her feminist art, which sought to empower women. She took the male-dominated art world by storm with her beauty, sex appeal, and talent. She did performance art before there was a name for it by shooting mundane household objects that were glued/clumped together with a pistol, and a river of red would erupt after being shot. She worked with famed French female intellectual Simone de Beauvoir on one of her most famous pieces, “The Rape”. The sculpture portrays a mother who has been attacked and raped in front of her child. A now-famous quote from Beauvoir’s novel ‘She Came to Stay’ sums up the artist’s intent: one must not allow oneself to be victimized. She captivated admirers and critics with her light-hearted and joyful ‘Nana’ sculptures featured colourfully painted voluptuous women with their disproportionately small heads, large protruding breasts, generously sized hips, and tiny hands & feet.