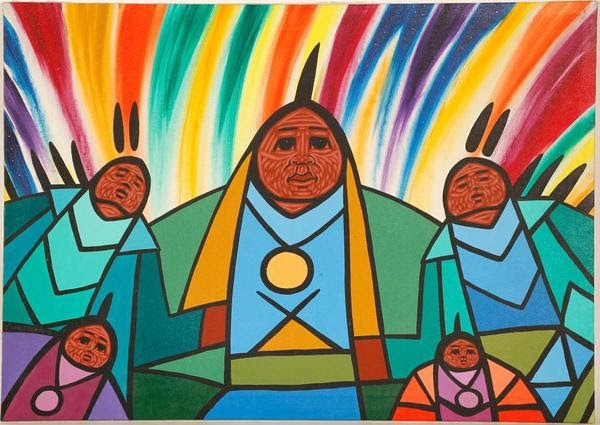 Jerry Whitehead is a painter of Cree descent who specializes in painting ceremonial powwow scenes, which are depictions of sacred social gatherings held by American and Canadian indigenous (or ‘First Nations’)  communities.

Powwow dancing is a common subject in Jerry’s work, which has been featured in art galleries throughout Canada and in mural-painted walls throughout Vancouver, his current hometown.

As a child growing up in Saskatchewan, Jerry liked to spend a lot of his free time drawing, using whatever material he could find, like ashes that remained from fires and lead from bullets his father used as a hunter. In his early teen years, Jerry started sketching with pencils and painting using acrylics.

Creativity runs strongly in his family with his grandmother doing animal hide art and his mother creating beadwork and braided rugs.

Jerry says that he feels lucky at how his family supported his artistic talents and gives them credit for allowing him to develop as an artist.

He enrolled in further training and got a Fine Arts degree from the Nova Scotia College of Art and Design.

Upon graduating, Jerry seriously pursued his painting career and exhibited his work across Canada.

His work has been commissioned by the University Hospital in Saskatoon, St. Paul’s Hospital in Vancouver, and the Summer Pops Symphony at Cable Wharf in Halifax, among others.